The Twitter Topic Explorer is an exploratory tool designed to expose and understand the temporal dynamics of Twitter conversations. Tweets related to a given event are recorded, and their content is processed to extract the main discussion topics and the activity of topics over time. By grouping thousand of tweets into thematic clusters, the Web interface provides a bird’s eye view on Twitter discussion and allows to navigate the time-varying topics and the attention they receive from different national communities of users. 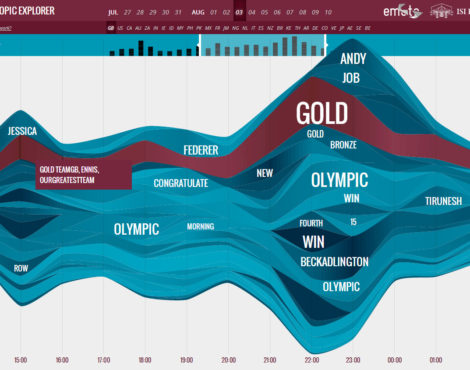 From a data analysis perspective, the aim is to extract the discussion topics and resolve their individual activity timelines. To this end, we mine term correlations across posts and over time, and expose latent topical signals using a technique based on non-negative matrix factorization. The result is a hierarchy of topics that can be cut to yield a thematic clustering with a chosen level of detail.

The Web interface, based on the stream matrix visualization described by Byron and Wattenberg (2008), focuses on the temporal aspects of the data and shows the daily evolution of discussions. Each stream in the diagram represents one topic. The stream thickness, which changes in time, is proportional to the number of tweets associated with the topic. The brightness of the stream indicates the attention that topics receives by users of a given country: the dark sections of the stream indicate an high concentration of tweets for the selected country. 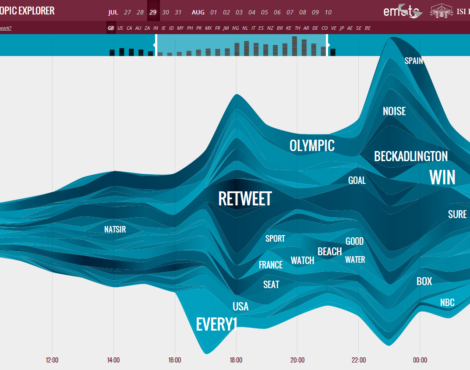 The interaction with the visualization enables to explore the data: Choosing a date from the top menu allows to explore the topical activity on a given day: see how discussions emerge, how they disappear, and how real-world events influence the discussion. Choosing a country allows to highlight how the attention of users in that country is spread over the shown topics. Dragging the slider on the top histogram allows to change the selected time window, to zoom in on salient moments, and to explore topical details.

EMOTO 2012
The main application of this interface is a collaboration with the EMOTO project, which provided real-time interactive visualization of Twitter data during the London 2012 Olympics. The project collected about 14 million tweets over the course of 17 days, from July 27 to August 12 2012. Here we show the topical activity for 15 days and more than 30 countries. Topics of discussion include several Olympic events, athletes, along with conversations on the ceremonial events and congratulatory tweets. 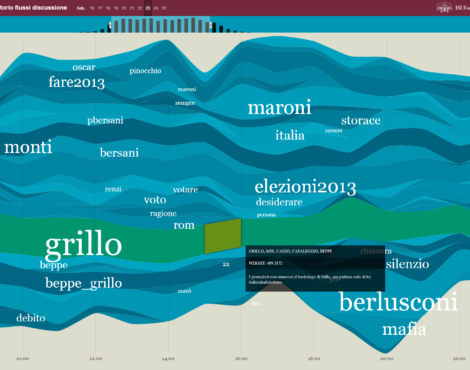 ITALIAN ELECTIONS 2013
The second application of this interface shows the Twitter activity during the 2013 Italian Elections. We used the Twitter Streaming APIs to record tweets mentioning the main candidates, during the days before and after the elections. In the resulting visualization, first published by TweetPolitik, the main candidates parties are visible and take most of the scene. After the elections the discussion veers towards the results of exit polls and eventually on the emerging political configuration.

ACKNOWLEDGEMENTS
We thank Moritz Stefaner and the EMOTO team
for sharing their data and for the insightful discussion.