Fluoutlook is a web platform for the exploration of influenza forecasts. It provides a visual interface to numerical forecasts of the current influenza season in North America and Europe through maps and charts. Activity data and forecasts are updated weekly, based on the reports of the official influenza surveillance systems in each country. 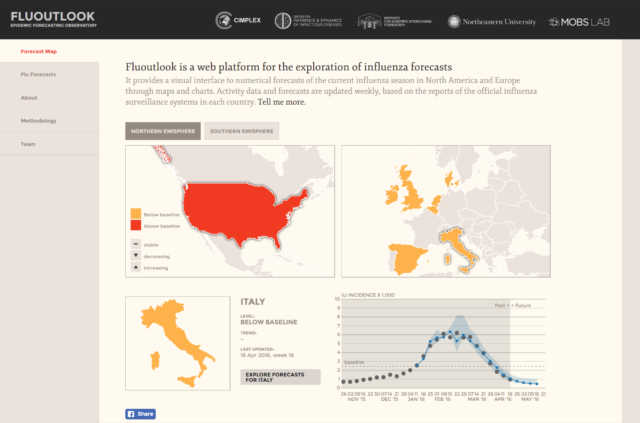 Activity data and forecasts are updated according to the availability of data from the official influenza surveillance systems in each country. In particular, for Europe, activity data is automatically collected from the ECDC website of surveillance of infectious diseases, and the epidemic thresholds for influenza-like illness (ILI) and acute respiratory infections (ARI) are calculated with the Moving Epidemic Method (MEM), implemented by WHO and by ECDC.

Maps show the current influenza activity level (below or above baseline) in each country and indicate the observed trend based on data reported by the surveillance in the last two weeks (increasing, stable or decreasing). Details on the forecasts for a single country are available by interacting with the map. The chart shows the weekly influenza activity reported by the official surveillance system, indicated by white dots.

On the Forecast page users can explore the flu forecasts for a given country, at different weeks through a sliding bar and by selecting different forecasting methods. Below the chart, a table provides statistical confidence intervals for the forecasted peak week and peak incidence for those methods that allow to get such projections.

The project has been developed by the College of Computer and Information Sciences and Department of Health Sciences (Northeastern University, Boston, USA) and by the Computational Epidemiology Group (ISI Foundation, Turin, Italy).