Twitter Orographies is an experiment in the visualization of Twitter conversations. Built on top of previous experiments, this interfaces aims to represent the discussion space of around a given keyword. It represents the semantic space of topics that emerge, the relative relevance of each topic, and the relations between the different topics that arise from the discussion. 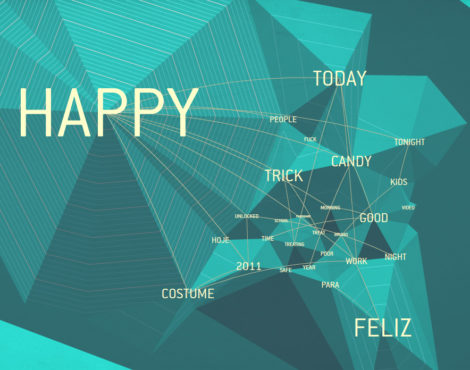 Operationally, Twitter Orographies works by listening (in real time) to the stream of all the tweets that mention a given keyword (or hashtag). Each one of these tweets is then analyzed by removing common words with weak semantic content (such as articles and propositions) and the remaining words are added to a weighted network in which the discussion topics are represented by nodes (weighted by frequency) and weight of the edges represent the relatedness of the topics (how often the two topics appear in the same tweet).
On the representation level, the network is once again filtered, and the interface shows only the topics that reach a given threshold in a given amount of time (eg. topics cited at least twice in the last five minutes). As time goes by, topics that are not cited often disappear, and new popular topics take their place, as do the association between words.
Once the final network is defined, the interface creates a semantic landscape out of the discussion, in which the most relevant topics appear as higher mountains and the emerging topics as lower hills, and where the relatedness is mapped to topic proximity and displayed through the use of explicit visual links.
The orographic metaphor allows to track the evolution of smaller and bigger landforms that represent specific topics, mountain systems that display clusters of related topics, orografic belts created by chains of given words (usually caused by pseudo-retweets). 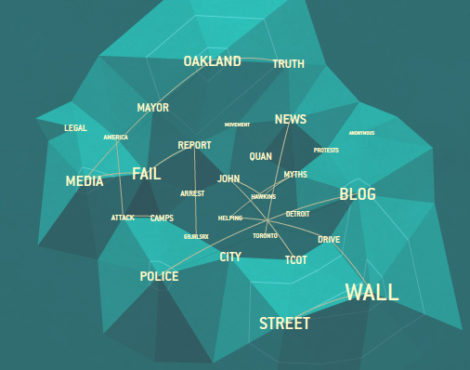 The interface, while quantitatively hard to read with precision, provides a space for exploration of a given discussion and a dynamic map focused on the continuous evolution of the semantic space. The sudden appearance of relevant reliefs, the relative persistence of given landforms, the unstable dynamics of the landscape, communicate on a familiar level the difficult dynamics of social discussions.

An early version of this project (in collaboration with Unità di Crisi) has been premiered at ArtVerona 2011.